Could you take us through a day in your life, from a possible morning routine through to your work? Do you have a fixed schedule? How do music and other aspects of your life feed back into each other - do you separate them or instead try to make them blend seamlessly?

Routine for me is trying to drink a good coffee, carrying a piece of luggage to the station, making music, reading and drawing in trains, going with Bartolomé when I can to the post office to send off the Shelter Press packages. Meeting new people and being often amazed by the energy and courage of people who are inviting me somewhere to do something. The part that I hate the most is logistics. At this very day I am writing, I don’t have a gallery or a tour agent. So I have to do all the papers, invoices, etc myself … that part is always very annoying.

What I prefer to do, if I have a day off, is sleeping in, taking walks, shopping for clothes and records, cooking, listening to music, drinking wine with friends and watching movies.

Could you describe your creative process on the basis of a piece or album that's particularly dear to you, please? Where did the ideas come from, how were they transformed in your mind, what did you start with and how do you refine these beginnings into the finished work of art?

Well, for example my track "Valis",on my latest record Hand in Hand was originally composed for a sensational and experimental film by the L.A based film maker Alexander Stewart. His piece is inspired by VALIS by Philip K DICK. First I sent him a version of the track without any voice only analog synths, midi sounds and infra basses. He asked me to add voices, sending me quotes from VALIS to pick. I really enjoyed doing that, using also randomness to chose the phrase while I was recording the voice. I felt very inspired by both the text and the film.

I would say that I can be creative anywhere, as soon as I have the feeling of being alone for a moment, free in space, time and mind. Travels are a big source of inspiration though. When I create a piece of music it’s a way for me go back with my mind to places that I miss, such as the desert in Arizona for example or the Alps.

How is playing live and writing music in the studio connected? What do you achieve and draw from each experience personally? How do you see the relationship between improvisation and composition in this regard?

Studio time is solo time. It’s way of drawing a lonely perimeter. It’s like a phone booth in the middle of the desert. You know eventually the communication is going to reach someone, but you can make it happen only by being isolated. Playing live is different. It’s connected to live duration. You make the call with the people in the room, they are your energy, sometimes for the good, sometimes for the bad.
My dream audience is an audience that feels like it is playing silently with you, that is as concentrated as you are yourself. It should be a kind of collective telepathic moment.

How do you see the relationship between the 'sound' aspects of music and the 'composition' aspects? How do you work with sound and timbre to meet certain production ideas and in which way can certain sounds already take on compositional qualities?

I am very interested in space in composition. How to build sculptures and architectures in a track. How to draw an inside and an outside in the sound. I compose the way I make installations, painting and sculpture. I use negative spaces, soft sounds, solid ones, I make knots, I elevate stuff, I burn some. I fold and make holes in the sounds I am using. It’s very physical to me.

Our sense of hearing shares intriguing connections to other senses. From your experience, what are some of the most inspiring overlaps between different senses - and what do they tell us about the way our senses work? What happens to sound at its outermost borders?

I am writing you from the South of France, in the Gers region, where I am spending a week of semi-vacations. Last night I listened to a little owl hooting while the the crickets where also speaking. The sky was shared by stars, planets, meteorites, planes and satellites. The air was smelling of rosemary. My skin was beaten by mosquitoes. I could hear someone running water in the kitchen and then opening a door. Memory landscapes and dialogues were passing by my mind.

This wholesome experience is the way I see music and art. How to be alert, passive and active, present, past and future, alone and together at the same time.

Art can be a purpose in its own right, but it can also directly feed back into everyday life, take on a social and political role and lead to more engagement. Can you describe your approach to art and being an artist?

It’s a complicated question, because being an artist is also something that deals with intimacy and private choices on the one hand and public engagements on the other hand. They also sometimes influence each other. I saw that while teaching, you need to be careful and responsible about that.
Responding to an interview is always on the verge of the public and the private sphere, and you don’t want to say everything about your life, not because you have something to hide, but more because life is not something fixed unless you are dead and quotes are often a sentence that has been truncated from its whole meaning.

Things change and statements also … and we are full of contradictions. Telling about your personal beliefs in an interview is also a strange call, especially because, from your side, you don’t know anything from the reader or the interviewer … it’s strange to speak about personal things I feel, don’t you? How is the reader living, voting, acting, that's something I’ll never know …

But, this said, what I can share is that I believe in gratuity of education, hospitals, in the rights of the workers to have vacations and equal pay for men, women and transgender, in the freedom of love, work, thought, expression, and travel for each and every one. I am against violence, bombs and  any kinds religious extremisms. I believe in public transportation, minimal waste, organic farming.

I hate visas and passports.

I believe in the rights of autochtonus and nomadic people as well as the ability to change your sexual identity. I am vegetarian and against animal slaughtering. I believe humans are not above nature. I think colonialism was monstrous and is still affecting social injustice until now. I wish the avant-garde art and music scene was more diverse, be it socially, sexually and ethnically and salute people who work in that sense. I believe in universal income.

I also think artists and musicians should be decently paid, and that people should be able to download and borrow books at the library for free on the one hand and buy books and records in independent places on the other hand.

These are my beliefs, and those beliefs are what makes me someone full of contradictions in my behaviors and actions, even if try to do my best, see? (laughs)

It is remarkable, in a way, that we have arrived in the 21st century with the basic concept of music still intact. Do you have a vision of music, an idea of what music could be beyond its current form?

I think music always existed, even before humans appeared. I believe thunder is music, fire burning, or bird’s sounds are music. I love to hear the water running from a shower or the noise of a broom on a wooden floor, a kettle or heart beat. I love to hear children speaking in a language I don’t understand and to listen to the ocean in the night. I also often think of non-hearing people and the way they still connect to vibrations and such kinds of emotions. I think also about the silent places of the cosmos and for me, all of that is connected.
But I am always interested in people who invented their own softwares or instruments, such as Sergei Techepianin with the Serge, Laurie Spiegel with MOUSE, Don Buchla, or Daphne Oram, Harry Bertoia, Harry Partch … 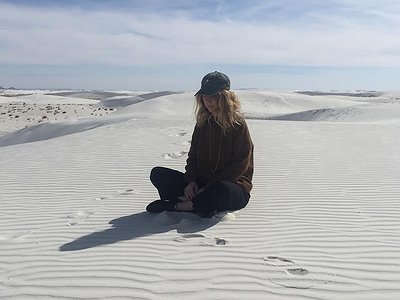 "I think music always existed, even before humans appeared."