Daedelus about Beats and Production

Some of the artists Deadelus has worked with and/or remixed, include Flying Lotus, Lymbyc Systym, Little Boots, John Tejada, DJ Shadow, Kasai Allstars and Death Cab for Cutie.

When did you start writing/producing music - and what or who were your early passions and influences? What did you learn from the masters of production for your own work?

I collected records, but the artistry involved was a mystery. Even playing instruments and studying music theory the LPs kept their secrets. It wasn’t until I burned out on playing dead composers that I felt like I needed to learn how to be self sufficient. To this day I wished I had circumvented the long route by diving in earlier …

Not that I’d trade a moment of the journey, but early on there were no masters I knew of, only those albums to puzzle out. I can say that hearing Acen’s “Trip II the Moon (part 1)” where the breakbeats and the swoon-y strings just effortlessly meshed, hinted at a much bigger world I wanted part of.

What was your first studio like? How and for what reasons has your set-up evolved over the years and what are currently some of the most important instruments or pieces of gear for you?

Amazing enough I can show you how it started … 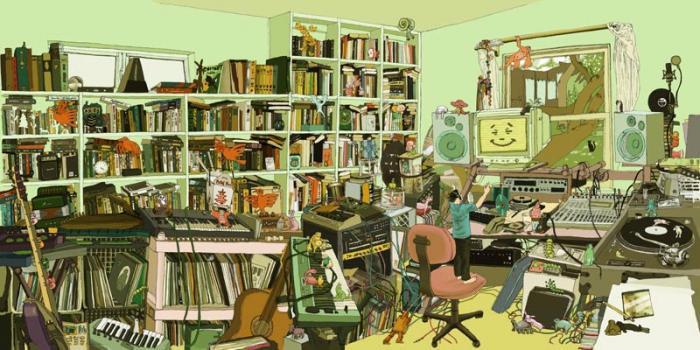 Artists Kozyndan did a fanciful portrait of my first studio, with me a miniature conductor. Amazing to think how much has passed through my fingers, gear gone.

When it comes to sampling vs playing something yourself, what are your preferences?

I’ve heard it said that when you are in a flow state that everything is effortless, the actions just happen, and the ideas occur unbidden. I think of songs like that, no searching for the right sample, fragment of melody, or underlying harmony. Doesn’t matter the source as long as it fits perfectly.

Within a digital working environment, it is possible to compile huge archives of ideas for later use. Tell me a bit about your strategies of building such an archive and how you put these ideas and sketches to use.

I’m in awe of structured systems like the kind Ross From Friend’s just revealed with his Thresho but I’ve no such plan in place.

In my experience you stay busy when mercurial inspiration arrives and get clever when it’s hard to catch an idea. Everything you do has merit, just not always timing. That’s the real producers skill, being on time with their artistry.

Have there been technologies which have profoundly changed or even questioned the way you make music?

Ubiquity of sound changed everything. The lack of scarcity not only transformed what we listen to, but also how we make. What is special when it is valueless, piped in everywhere, and never finished?

Sometimes the thought of this overwhelms me into silence, but inevitably the urge to create reappears and I forget for a while how senseless it is to even try.

Where does the impulse to create a beat come from for you? What role do often-quoted sources of inspiration like dreams, other forms of art, personal relationships, politics etc play?

Inspiration is overrated. Urgency doesn’t come from idle dreams. Music isn’t the roiling center of culture battles and personal identity as it once was, however it certainly still closely aligned. I need music far more than it needs me.

For you to get started, do there need to be concrete ideas? What does the balance between planning and chance look like for you?

No need for a cogent thought, but there should be good reasons. That’s a conclusion I’ve come to. The act of music making is the closest thing I have to a religion so it’s more an act of devotion and faith.

What do you start with? How difficult is that first bar of music?

Those good reasons I mentioned are difficult to come by. Not an everyday occurrence, yet I could sit everyday and try to move the measures around, play it like a video game. I guess that’s the difference between great lasting songs and the simply floor fillers.

Using an example, can you tell me how you produce a beat? In your opinion, what makes a great beat?

Define your expectations for the listener. If I’m going for headnod I need to aim for breakneck. If sad and lonely I need it to sound destitute.

A beat isn’t an NPC for the adventures to get plot from, rather it’s the entire world we are building. Physics and all.

When will you leave a beat to work its magic by itself as an instrumental and when will you add vocals to it? Do you see beats as an artform in their own right?

This is where it gets real interesting. If you’ve done the work of reinventing the world and how it works then a vocal just surfing atop can feel petty or worse und0 everything. Artist needs to meet artist equally. Concentric circles the size of the song.

Collaborations can take on many forms. What role do they play in your approach and what are your preferred ways of engaging with other creatives through, for example, file sharing, jamming or just talking about ideas?

Sessioning up in the same room is preferred, getting on the same page and creating from scratch. Not that this happens often at the moment.

In the case of “Holy Water Over Sons” (the collaboration with Joshua Idehen) sharing back and forth across many the Atlantic protracted our process, Covid ground it to a halt. You hear the labor in the tracks. Backstory is the music was going to be lighter, easier, maybe dancing when it was initially conceived. Then our lengthy delays allowed a deeper meaning to be installed by this cruel history playing out.

How do you choose vocal collaborators for a particular beat and what, in your opinion, sets a great vocalist/rapper apart from a 'merely' good one? Do you produce beats specifically with a vocalist in mind?

Everything bespoke and made to measure. Even when pulling something off the rack you can tailor it to fit. Great vocalists don’t need such suits, they could spit bars over pen beats and stay great, but I’d like to hear what they do over mine. I feel lucky to have worked with a few.

After you've recorded all the vocals, what is the arrangement process like for you and what is different in hip hop production compared to, say, a rock or pop piece? How do you stand in terms of producing "freestyles" versus "songs"?

Expectations. I feel like in all the cases it’s know your audience, but know you don’t know better than them.

How Hip Hop heads are some of the most demanding, willing to critique even their favorites mercilessly. Is there ever just a freestyle? The secret is it’s all written at some level.

How do you see the balance between writing for current trends, referring to classic sounds or creating a personal signature sound?

Even as the current fashion is No Drums I didn’t think “Holy Water…” fits into that trend. This record speaks to our current moment, so by definition it won’t be timeless, but hopefully it sounds like the future enough to warn others ahead about the past. That’s a big wish.

Many listeners will usually focus in on the contribution of the rapper(s) in a hip hop song. But the beat and musical elements provides for the emotional foundation of that performance. How much of yourself is in the finished production?

I’d offer there is no separating the two. Terribly biased of course, but this greatness you speak of is when it all comes together like a fist.

"If you’ve done the work of reinventing the world and how it works then a vocal just surfing atop can feel petty or worse und0 everything. Artist needs to meet artist equally. Concentric circles the size of the song."